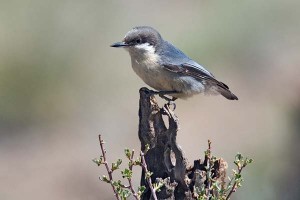 The tiny birds I was talking about earlier are Pygmy Nuthatches and they seem to show up on warmer days and after I’ve walked the labyrinth at least once.

I head out, slip off my shoes and start walking, thinking about the different things in my life that are generating uncomfortable emotions.  As those thoughts slip away, my breath slows, my pace slows and I start to pay attention to bird sounds.  There are some acorn woodpeckers who are hollering about something a few trees over, and then the scrub jays join in, squawking their fool heads off, as they’re wont to do.  I can see their shadows as they’re flying about up there and then, all of a sudden, a much larger shadow is circling.  I look up and see the glide of some sort of hawk as it soars above me, circling around the top of the redwood tree.  No wonder the woodpeckers and the jays are sending out alarm calls.  Then things quiet down again as the hawk moves off.

As I’m headed back into the Maiden spiral, the spiral that is the closest to the water fountain, I hear the little nuthatches as they start to show up in the upper branches of the redwood above the water.  I slow to a stop and watch as one by one, the five nuthatches (I’m hoping they’re the same five from earlier, but really, I have no idea) flutter down, hopping along the edge of the top fountain, dipping down for a drink.  I stand there for a long time.  Enjoying them.  Then I start to walk again slowly.  They continue drinking and fluttering, and then I hear an alarm call.  I look up.  It’s our black cat, Chocolate.  He’s making his way over to the fountain.  The nuthatches head back up to the tree and then out.

As I continue walking I realize that I’m sad that the cat came and then the birds left.  I love our cats, but the labyrinth is different when they’re here, quieter.

He leaves, and then I start to hear, high in the tree, the acorn woodpecker alarm call again, and then scrub jay alarm calls again.  The calls are coming more frequently and with a more jangled sound, as if to say, “No, really!  This is important!  Pay attention!”  Of course, if it were really serious, then all bird sounds would stop.  So it’s not life threatening, but it could become life threatening. . .

And then the scree from the hawk.  And another scree.  It’s such a unique sound, that scree.  It confuses me a little, the scree.  Although, I suppose hawks need to communicate, too.

And then, looking down, I see ACCEPT.  Another of the word stones in the labyrinth.  Oh that’s right, just because I don’t like something doesn’t mean that it shouldn’t be here or shouldn’t show up in some way.

Breathe in, breathe out.

You have Successfully Subscribed!